Hey y’all, quick update today. I’m really looking forward to next weekend and the Thirsty Orange Craft Beer Extravaganza. I plan on leaving Mur-vul first thing Friday morning to go visit a friend named Adam at his brewery, The Damascus Brewery. This is located in, you guessed it, Damascus Virginia. I remember visiting the Virginia Creeper Trail a few years back and thinking that Damascus would be the perfect place for a brew pub. After visiting there I plan on going to Kingsport, TN to visit Sleepy Owl Brewery. My friend Brian Connatser recently came up with the funds to start Sleepy Owl through a successful kickstarter campaign. He’s not brewing yet, because he’s still waiting for his TTB permits, but I’m going to check out his system and see what the future holds. Then it’s off to Johnson City to check out the site, get settled in to the hotel and go to the Friday night beer dinner at The Battery. The menu for this looks incredible. I am mostly vegetarian, but I’m not passing on this. It’s more calories then I normally consume in a week, but I’m not worried because the next morning I’m running my first official 5k.

The Run For The Booty is a color run, meaning they bomb the crap outta you with colored cornstarch that sticks to your sweat. You come out looking tie-died at the end. This isn’t a timed race, because they have unique stations set up along the route where you did for gold coins and other prizes. This is a fund raiser for ETSU’s new football team. After I run, I’ll get cleaned up and head to the site to get set up. Much like last festival, I’m running the mobile infuser.

Of course, I’ll be blogging about all this after the fact and of course you can follow along in real time on my twitter feed.

Today (I’m writing this part on Saturday April 5th), I started my day early. Friday after work I took my son to go see the new Captain America movie. We got popcorn and I ate way to much of it. I have been trying really hard to stick to my diet and everyone knows movie theater popcorn has a bazillion calories in it. So I was feeling guilty and chastising my inner fat boy. So instead of going out or drinking beer that night, I made myself go to bed early so I could get up and run. I did 5 miles beating my record by 5 minutes. After I showered and changed, I drove to Knoxville to the Happy Holler neighborhood for Hops and Hollers’ Grand Opening. I had seen my friend Charles on Thursday night at South College’s Brewing Science Program Graduation party at Saw Works. I didn’t know he was co-owner. We started talking and he said they were going to open on Saturday at 11. I said I’d be honored to be his first official customer. He said, “Do it!” so I was there at 10:30. This is a cool spot on Central. It’s not as far down central as Taps and Flats. I walked in and was greeted by Charles and his partner getting ready. They were still writing the tap list on the board. I took a few pictures and at 5 till 11 I asked for a pour. I got Terrapin’s RecreationAle. It was the first pour there. I had brought along some markers and had a 1 dollar bill so they could put their first official dollar as a business up on the wall for good luck. I can’t wait to go back and drink there again. I could only have 1 beer because I had to work at the Beer den, so I said goodbye and headed back to Mur-vul.  On my way I picked up some flyers from my new friend Joe Fox to put up for CurtisFest.

Outside of Hops and Hollers

Inside of Hops and Hollers

The view from the door

He’s writing the beers on the board

Outside seating at Hops and Hollers

Me enjoying the first official beer at Hops and Hollers

What is CurtisFest? It’s a small intimate craft beer festival that will take place 2pm to 7pm on Saturday April 26th at Mead’s Quarry at Ijams Nature Park. This is a festival mainly to celebrate the life and legacy of a good friend, Curtis McArthur. Curtis passed away due to a tragic accident on New Years eve. All of us who knew him are still in shock and mourning. Curtis was beloved by all. As a rep from Sweetwater brewery, he traveled around and was a fixture of the craft beer scene nationwide. I got to know him from his many trips to Knoxville and we hung out together at many festivals. I have some Sweetwater swag given to me by him that I will treasure forever. His longtime friend Joe Fox started the Curtis McArthur foundation to raise money for scholarships for South College’s Brewing program. This is a way to honor his memory and is something that ol’ Dirt McCurt would have approved. The money from CurtisFest will go to this and to his memorial fund.

So what is going down at CurtisFest? Good people drinking phenomenal beers in an absolutely gorgeous setting. Tickets are $50 and worth every penny. You get an official Curtisfest tulip glass and unlimited samples of some of Curtis’s favorite breweries. These include Asheville’s Wicked Weed and Highland, Nashville’s Yazoo, Terrapin and Sweetwater from Georgia, Knoxville’s own Alliance and Saw Works along with Founders from Grand Rapids Michigan. They expect to add more breweries as we get closer to the date. Curtis was big into sharing beer, so that is a big part of the festival as well. Dig in your cellar, grab a couple of rarities and bring them out to  let other people enjoy them. Who knows, maybe someone else who’s doing the same will have that rare white whale you’ve been searching for. For people who live or are booking a hotel room downtown, there will be free shuttles going back and forth from Market Square to the site.

The other really cool parts of this festival is the food truck fish taco cook off. There will be some stiff competition to determine who makes the best one. Also on tap is a dj playing Curtis’ favorite tunes, so come prepared to boogie! If that isn’t enough to entice you, there will be disc golf, corn hole, paddle boarding and kayaking demonstrations as well. So go ahead and make plans to attend now. For a festival of this nature, there are a very limited number of tickets being sold. You can purchase them online or at the following locations: Barley’s in Knoxville and Maryville, Central Flats and Taps, Hops and Hollers or come see me out at The Market in Maryville, where Dave and I have them for sale. Even if you never met Curtis, please come help us honor his memory and make some great memories while doing so.

This is all for now. I’ll write again next week after Thirsty Orange. Don’t forget I work Sundays at The Market and do a different infusion each week.  We also do a bottle share, so garb something cold and come on down. 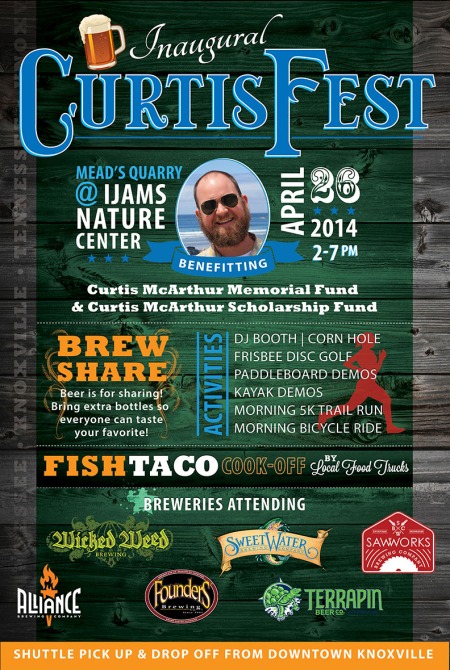