In case you missed them, read these post from other #KnoxBeer blogs:

With the busy holiday season upon us, I don’t know when I’ll get a chance to post again. Maybe after this weekend’s short jaunt to Chattanooga, or perhaps after my yearly Christmas beercation to Asheville. Either way I think I’ve done good this year posting as much as I did. With that said though, I am going to redouble my efforts to post even more in 2013! I also hope to make serious strides to go from homebrewer to pro.

Anyway, enough about that. Last weekend I had 2 beer events going on. Friday night I poured samples of my “I’m Warming You!” and Oktoberfest at Jackson Avenue Market. Saturday I provided beer for a private party at Saw Works Brewing‘s headquarters. Instead of writing more about that, I’ll refer you to a friend of mine’s website. If you aren’t checking out Saccharomyces Rex’s blog on a regular basis, you should. It’s written from the perspective of a downtown dwelling mini-dino who loves drinking craft beer. It was his party I provided the beer for. Check out his blog post about it HERE. Disclaimer: A few people asked me if I am really the person behind Saccy’s blog. I promise that I am not.

Another local blog to follow, (and the one that inspired me to start mine), is the Knox Beer Snobs. They have a great post about what to get the Beer Snob in your life for Christmas.

Does anyone know of any other Knoxville beer blogs? Since it’s such a small scene, I figured I’d know of them, but am asking just in case. I am specifically want to know about ACTIVE blogs.

A podcast I’ve been listening to during my morning workouts is the Brewing Network’s Brew Strong. This show is hosted by brewers and authors Jamil Zainasheff and John Palmer (both I met at GABF).  Recent shows have focused on all issues pertaining to starting and running your own nano-brewery. If you are even mildly interested in beer, I recommend going to The Brewing Network’s website and downloading a few of the free episodes.

Westvleteren XII was released in the US today. Find out more about this super limited Trappist beer at this website, or listen to this NPR story about it. A 6 pack box with 2 tasting glasses is going for $85 retail. Unfortunately supplies and very limited and it’s not available for sale in Tennessee. I do have friends however that are getting this and promised to hook me up with a bottle. I’m crossing my fingers and hoping this happens.

Well this is all for now. I will try to post again soon, but in case I don’t get a chance to do so before the holi-daze I want to wish everyone a Beery Christmas and a Happy New Beer!

Have a Beery Christmas
-Ratchet Claus

Hey y’all just a short update this time. Let me start out by saying that last Sunday was a pretty successful brew day thanks to the Help of Richard Groves and Todd Z-Machine. Followed by an incredibly tasty lunch thanks to Kat. We busted out 10 gallons of all grain Belma Hopped Pale ale that I’m calling KBC 505 in honor of an inside joke with some Knox Beer Crew guys I went to GABF with. (No, I’m not going to explain it, ask Mark Baggett, Big Magic, Animal or Matt Crowell to explain it to you- if they can remember the details.) It’s pretty much done fermenting and I anticipate kegging it next weekend. I also anticipating brewing again next weekend, but at this point I’m not sure what.

Measuring Grains for the KBC 505 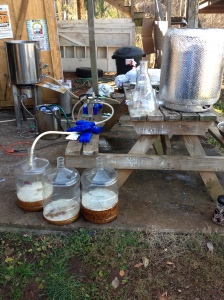 So the KBC 505 begins fermentation

Anyway the main point of this post is to invite everyone out to Jackson Avenue Market in the Old City tonight. I am doing a First Friday event with my good friends the Weidenhamer brothers (Matt and Todd). Starting at 6pm I’ll be pouring samples of my Winter seasonal, “I’m Warming You!” which is a Chocolate Milk Stout brewed with Tennessee Cherry Chilis and Jalapenos. My beer is free. However, I think Jackson Avenue Market wants you to purchase a pint glass to pour the beer in. As far as I’m concerned, you are welcome to use your hands to cup beer in, just as long as you clean up any messes afterwards. There is other tasty beer available to purchase and if enough people show up, I’ll hook up my last keg of Oktoberfest to sample after the Stout is gone. I suggest getting there early for several reasons.

So please, come out, drink my beer, tell me if you like it or not (be honest, I HATE people who don’t tell you the truth to spare your feelings). If you don’t like it, tell me why.

If you would like to support my ongoing efforts to raise my brand awareness and get my nano-brewery off the ground, I’ll will have a few t-shirts and bottle cap fridge magnets for sale.

I’ll see you tonight, and don’t forget to tip your bar tender 😉