A lot happens in a month. It’s been that long since I last wrote here. I just haven’t been inspired to write. It’s not like a lot of stuff hasn’t happened. I just haven’t gotten around to (or felt like) writing about it.

I guess I could start where my last post left off, Asheville Beer Week. Despite my intentions, I only did a few days there. Sunday ended with Westside Fest. It was a great festival despite having to run around to the local homebrew and hardware stores to get a few missing parts for the Randal. I ended up on the news once again. After the event Sunday, I was just tired. I sobered up (hadn’t drank too much there anyway), ate dinner at Asheville Brewing Company and drove back to Maryville. This was the opening weekend of Asheville Beer Week and I had originally planned on going back the following weekend. For some reason this year, I just wasn’t feeling it and decided to stay in town and work instead. After all, Sunday June 1st was the first Sunday where we were open at Bluetick Brewery. It is my day, being that I was the one to convince Christopher to let me open up the bar and make him some money. 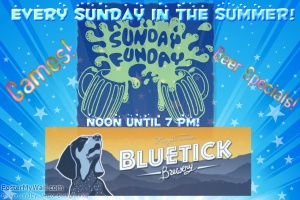 Let’s see, what else has happened in the last month? Quite a few things actually. June 6th Trader Scott, Richard and myself took short beer trip across the mountains. We went to Sylva, NC to bottle shop at Pj’s, checked out Innovation Brewing and Heinzelmanchen Brewery. This was right before going to a bottle share party & trail magic release at Nantahala Brewing Company. It was just a day trip, really fun and much needed.

Most of what has gone on has been at Bluetick Brewery where I now work full time. The Blackberry Farm Brewery gig didn’t last long, as I wasn’t a good fit there. Bluetick is definitely my type of place and it’s exciting to be on the ground floor of a up and coming brewery. I set up and promote events as just one of my duties. Our biggest event took place on June 20th. It was our Grand Opening, and the place was packed. Here is the WBIR news segment about it.

The next day was Knoxville Brewfest near the Southern Railway terminal in downtown. Another duty of mine is being the festival guy, so we set up and poured 2 of our brews. It was a lot of fun and thankfully we had enough volunteers so that I could get out and socialize with friends at the fest. Not that I didn’t spend a lot of time at our booth. I wasn’t the driver so after the fest we hit a few parties around Knoxville before going home.

Other then this, my life has been pretty routine. I injured myself running, so I am still trying to rehab my leg. I still run a little (until it starts hurting) but mostly doing my exercise bike while watching movies. Most of my time is spent at Bluetick Brewery working. Tuesdays I go in early, place beer orders, meet with distributors, make phone calls, write the newsletter and bar tend for the very few people who come to have a beer. My usual bartending nights are Thirsty Thursday, when we put our weekly batch of beer on tap, and Sunday Fundays. Sundays are my favorite because it’s laid back, we get a pretty good crowd and group of regulars and we do a bottle share at 2pm. This Sunday I anticipate that I’ll get my “Elite” badge on Untappd for having 2500 unique check ins. I joined Untappd on June 19th, 2011, so this milestone has taken me a little over 3 years of trying different beers to achieve. I’ll be bringing out the best stuff from my cellar to celebrate. So if you want to participate, grab a bottle and come on down.

This is all for now. I don’t know when I’ll write again. I’ve been writing the weekly Bluetick newsletter so that’s been taking most of my creative juices. Of course I still constantly tweet, so there’s that. Until next time.

One of my new favorite canned beers

Myself with Jay from UBC

The Urban Orchard crew at Westside fest in Asheville

Only 3000 bottles in existence

My 2400th unique check in on Untappd

The Nantahala Brewing Owner Joe and brewer Greg with Richard, Scott and myself.