Recap of Friday, Day 5 and 2nd to last day of our #AVLBeerWeek #Beercation

Friday morning found us back at Izzy’s Coffee Den. We had actually gotten a late and barely had time to enjoy our drinks as we worked on the blog. Before we knew it, it was time to go to the next event. We had recieved a private invitation to attend Digital Relativity’s Beer Marketing (That Doesn’t Suck!) workshop. This event took place on the 10th floor of the Hotel Indigo. Arriving to complimentary valet parking for attendees, we were escorted to a posh condo overlooking Asheville. Many of other other friends in the beer industry were there. Brewers, venue owners, marketing and sales reps, and of course, bloggers. Leading the workshop was none other then Pat Strader. We’ve both know of each other and have been friends on untappd, but this was the 1st time meeting in real life. Pat walked us through an informative 2 hour presentation while we sipped beer and snacked. I learned quite a bit from this workshop and plan on implementing some of his suggestions as soon as possible. Being that it was going to be a very busy day, so of the brewery reps had to excuse themselves early to get ready for various events they were hosting around town. We had planned on taking a trip on the Pisgah Brewing to see our friend Gaines and to take a short tour and purchase some rare bottles. We realized how short we were on time. Gaines was at the workshop and apologized that he wouldn’t be bale to take us on a tour but he would make sure to let other people at the brewery know we were coming so they could show us around. As we left Hotel Indigo, Julie from Bruisin Ales told us that she had just gotten a shipment of the rare bottles from Pisgah the day before. We elected to go there instead and picked up a few other things that had just came in as well. By now we were hungry and Katie always craves Panda Express when we are in town, so we headed over to the Asheville Mall so she could get her fix and I could pick up a new cord for my beleagered computer. After getting her food to go, and a quick stop at Radio Shack, we headed back to the hotel to prepare for the Asheville Rare and Wild Beer tasting event. We could see the line forming from our hotel balcony. 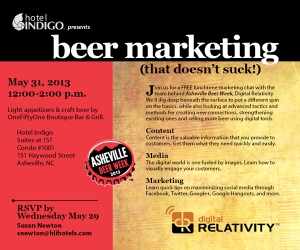 At 6 pm we walked the few short blocks to The Mill Room where The Asheville Rare and Wild Beer Tasting was taking place. This was a small event with only 250 tickets sold and many breweries brought their rarest creation. Many of the bottles and kegs were the last ones in existence. We walked around seeking out the rarest of the rare and were joined at the event by our #KnoxBeerCrew buddies Todd & Joey. It seemed like everyone at tasting knew each other. This tasting was put together & sponsored by All About Beer Magazine with a portion of the ticket sales going to Pints for Prostates, an organization that focuses on men’s health issues. I really enjoyed the event. Most of the beers will never be brewed again, the food was amazing and hanging out, meeting and socializing with everyone was great. The only thing I thought could be done better next time is to extend the time the event runs. With over 30 different beers being served, the 3 hours alotted was just not enough time to responsibly sample everything that I wanted to.

When the event ended at 9, we got our group of friends together and decided to go to Wicked Weed to enjoy thier new collaboration with Foothills, Batch 69. I had glasses, stickers, magazines and other swag from the event, so I headed to the hotel to drop it off while Katie, Joey and Todd went to WW. I took a few minutes to freshen up, drink some more Emergen-C and down the last of my multi-vitamins. I arrived to find Wicked Weed packed, as is typical on a Friday night. I bluffed my way pass 2 sets of door guys by telling them I was already seated with my friends and had just walked out for a moment. This allowed my to bypass the line and go immediately to drink with my buddies (yeah I know, I suck.) I bought a half pour of Batch 69. This beer is a combination of Wicked Weed’s Freak of Nature Triple IPA and Foothill’s famous Sexual Chocolate, brewed and combined together at the same time. It was incredibly delicious and I may or may not have purchased a mini-growler to share with friends back in Knoxville. I spoke with Luke (who I almost didn’t recognize at first due to his 70s costume and wig) about this beer. I asked why they didn’t name it Sexual Freak. He laughed and said that is what they considered at first but knew it would be too risque. It just so happed to be the 69th batch brewed by Wicked Weed, so it was just fitting to call it that.

We sat around enjoying each others company and beer. I was happy to see that Todd was having an indepth conversation with Mitch Steele, while Katie spoke and hung out with Abby, Luke’s wife. Aaron and Stephanie Carson came to hang out as well. There was a band playing funk jams. They were really good, and afterwards hip hop music played while inebriated patrons got down and danced. It was getting late and around 1 pm we headed towards The Thirsty Monk for 1 last beer. Katie did her best to heard us 3 big drunk guys down the road and keep us out of trouble or from falling off the sidewalk. We got to the Thirsty Monk to find it closed (again!). Instead we headed across the road to Jack of the Woods. After one last beer it was time to pass out. We said our goodnights to Joey and Todd and passed out almost immediately.

Today is another big day. We are going to take a quick tour of Riverbend Malt House and then get ready for Beer City Festival. That runs until 6, and we’ll see if we can make it the whole time. Other Knox Beer Crew friends of ours such as Matt and Krissy Crowell and Jason and Beverly Anderson are coming in for the day. They will be bar hopping while we are at the fest, and we have plans to hang out tonight. Since this is our last day of beercation, we plan to make the most of it. Tune back in tomorrow for a recap, and in the mean time, check out my untappd check ins to see what delicious brews I’m consuming. There is also my twitter feed and the #AvlBeerWeek tag to follow as well.

See you at the fest!

One Response to Recap of Friday, Day 5 and 2nd to last day of our #AVLBeerWeek #Beercation