Originally this post was going to be another live blogging of brew day. I actually started it that way, but brew day was incredibly busy and fun as you’ll read below. There is no way I could have blogged everything in real time. Instead, this post is my recollection of  what could possibly be the best weekend I’ve had in months. The weather was absolutely gorgeous. I started off Friday evening by heading to my 4 favorite watering holes downtown. Of course I’m talking about Downtown Grill and Brewery, Suttree’s, The Casual Pint and The Peter Kern Library. I wanted to be out enjoying the weather and the company of friends after a long work week.

On the Megatouch Machine at the upstairs bar, Downtown Grill and Brewery

Schlafly’s AIPA on the front patio of Suttree’s 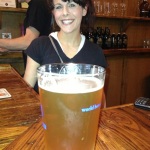 Weird scene as these 2 groomed each other for minutes on the sidewalk. Downtown Knoxville WTF moments.

My friend and attorney Chris Irwin enjoying his Murphy’s stout at the Peter Kern Library.

I spent the 1st half of Saturday doing, chores, cleaning my house while enjoying the spring  breeze blowing through my open windows and screen doors. Later I spent some time with my son, then headed downtown to see Cutthroat Shamrock play a free show at Market Square. I planned on getting a lil’ swilly, so I left the car at home and walked the less then a mile from my house to downtown (never drink and drive y’all- it’s a horrible idea). I pre-gamed with a beer at home, some blackberry moonshine (thanks Nijoli!) mixed with coca-cola and ice in a to go cup for the walk. Once downtown I stopped by The Casual Pint where I met with a few friends. I slowly sipped on a beer until it was time for Cutthroat to take the stage. Once the band started, I realized I was sobering up and should do something about it. I didn’t want to pay $2 for a wrist band to buy $5 crappy beers on the square, so I walked over to Downtown Wine and Spirits and grabbed a bottle of Bourbon. I was able to sneak it in my pocket, went to Subway and bought a large coke. Mixed it up and took my cup to the front of the stage where I met up with more friends. I got to say, I love this band.  Now I don’t like to talk about it on my blog, but my close friends know my personal life. Let’s just say it was a rough week. As the bourbon worked it’s magic I cut loose. Dancing to Cutthroat Shamrock’s celtic/punk/bluegrass/ piratey tunes was absolutely cathartic. I was in motion for the whole time. I shared my drink and others did the same. Flask were passed about, beers were shared, complete strangers danced with arms around each other. The show came to an end around 10:30 but I was so amped there’s no way I wanted to go home. I knew Suttree’s was packed, so I headed back over to see my friends at The Casual Pint. There was only 2 people working and they were super busy. Nena was worried about underage people coming in, or people stealing beer off the shelves. I offered to play doorman for a while for a couple of beers. I sat at the door and checked IDs. People I knew walked past and stopped to talk. I remember more beer being shared, a snort or 2 of someone’s homemade white lightning and a  few swigs of wine. 11:30 and I knew it was time to walk home. I had planned on going to The Casual Pint’s Bearden location the next morning for their kegs and eggs event before brewing beer. It was a long, rough walk home with many stops to rest on the way. I got home, past out, woke up in the middle of the night, drank some vitamin water and took some ibuprofen. 7:30 am alarm Sunday morning and I got up, made coffee and headed to breakfast.

Cutthroat Shamrock played their encore song in the middle of the crowd.

Well I enjoyed my omelet with Richard and his wife Sandy, and headed home to start brewing. I had success cultivating Heady Topper‘s yeast strain, Conan, from a couple of cans I saved for just that. I took my direction from this wonderful blog past and was able to step up to a 4500 ml starter between Wednesday and Saturday. Honestly, I was very worried it wouldn’t work. I made the starter on Wednesday, pitched the yeast dregs from the cans into the flask on the stir plate and waited. Two days went by with no activity. I thought my experiment was a failure and was already planning to use my old standby, Safale US-05. However by Saturday morning the starter was rapidly fermenting. YES! This yeast strain was a big part of the batch of beer I planned, and I knew it wouldn’t be the same without it.

Sunday my friends Jerry and Millie were the 1st to arrive. Jerry was very helpful when it came to getting everything set up. Usually I start brewing at the crack of dawn, and starting at 10 am instead is a lot later than usual. Having an extra set of hands, along with Millie documenting everything, was awesome. Next to arrive was assistant brewer Richard, followed by Todd. Millie ran to Earth Fare and picked up an incredible variety of sushi.

Once we got going, I started texting friends to come over. Beer and buddies on a perfect spring like day, what could be better? My friend Chris is hosting a group of law students from Kansas who are interning for his environmental law center on their spring break. I told him he was more than welcome to bring them over to learn to brew beer and enjoy a few. I was expecting maybe 3 or 4 people, and the next thing I know, there is a dozen or so people gathering in my basement brewery. Awesome! The more the merrier! The spring breakers were absolutely thrilled to lend a hand and learn about the brewing process.  Terri and Aimee from the Knox Beer Crew came over. More and more friends arrived.  At one point there were 24 people there laughing, talking, drinking, and dancing to good Irish/celtic punk  like Flogging Molly, The Pogues, The Tossers, Cutthroat Shamrock and Dropkick Murphys on my Pandora feed. This was a proper St. Patrick’s day party! The beer was really flowing and I was on top of the world! We drank down my stash and I can honestly say I now have room for food in my upstairs refrigerator again.

Cheers to you Jerry!

They always after our Lucky Charms!

This picture is both funny and disturbing.

Richard is always stirring things up!

MMM MMM so good! Thanks Todd!

Terri and Aimee brought this gem

Absolutely amazing Bourbon Barrel Aged Stout from a can. Thanks Todd! 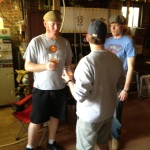 One of my favorite beers of all time. Meant to be drank warm.

Todd shared this rareity. So good!

The last one, thanks Todd!

Well brew day eventually came to an end. With all the people there, cleaning was a breeze. People started taking off a few at a time. The law students wanted to go check out Ijams Nature park while it was still light out. The crowd got smaller and smaller. Eventually I was by myself, exhausted but incredibly happy and a little bit buzzed. I laid back on my couch in my brew basement for a few minutes and enjoyed the silence with a big old grin on my face. I knew I should eat dinner. I didn’t want the weekend to come to a close so I got up and walked back downtown for food. I ordered a half Dan’s pasta at the Brewery and went and visited Suttree’s for a sample size beer while my food cooked. After a few minutes I picked up my order to go and brought it over to The Casual Pint and washed it down with 2 more sample size beers.  As I walked back across the Gay Street bridge while the sun set, I thought about how no matter what’s gone on recently in my life, I am truly blessed. I have good friends, I brew beer people enjoy, I have food, clothing, shelter and a good job. All that and I had one hell of a weekend.

Here’s to many more.

PS. Every brew day should be a party. I plan on brewing again on Sunday, April 21st. If you’d like to come over, send me an email or text me. Also Nantahala Brewing Company’s next Trail Magic bottle release is this Saturday the 23rd at Noon. Richard and I are going if you’d like to join us. We plan on getting there by noon and being back in Knoxville by 4 pm or so.