I was able to once again visit the nearby beer mecca of Asheville, NC for this year’s Winter Warmer Beer festival. The event this year was on the main floor of the Asheville Convention Center.

Arriving a  little early to avoid a long line, I ended up being one of the first people in. 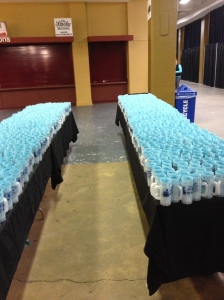 Cups waiting for their new owners

At 3 pm they opened to the general public (those of us who had regular tickets and not early VIP admission). I headed directly to Cigar City’s booth and was happy that there wasn’t a long wait to try their rare and delicious beverages.

After tasting Bourbon Barrel Aged Big Sound, Humidor Series Double American Black Ale and Church On A Hill Barley Wine, it was time to go over and see the good folks at Wicked Weed‘s booth. 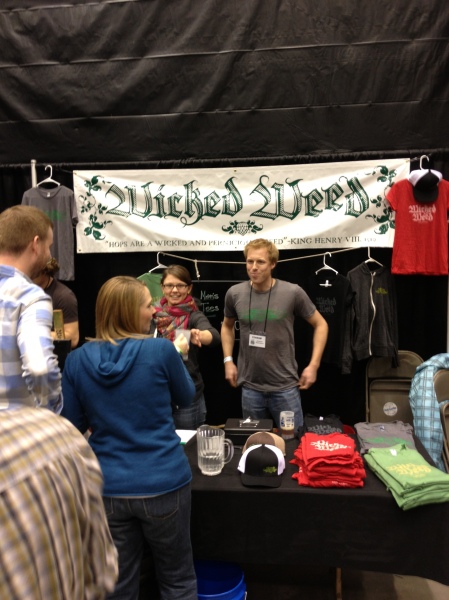 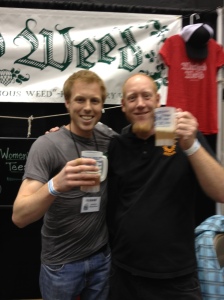 Luke from Wicked Weed and myself

I spoke with Luke for a few minutes and tried some of their beers that I haven’t had yet. They are as good as everyone says they are. Freak IPA is especially delicious. I walked around and spoke with various brewers. I also ran into fellow Knox Beer Crew members and people I had met at other beer festivals.

Dieter from Heinzelmannchen Brewery and myself

Myself and Jason Caughman, owner of Pisgah Brewing

Nicholas “Big Magic” Walsh was VERY happy to see me. 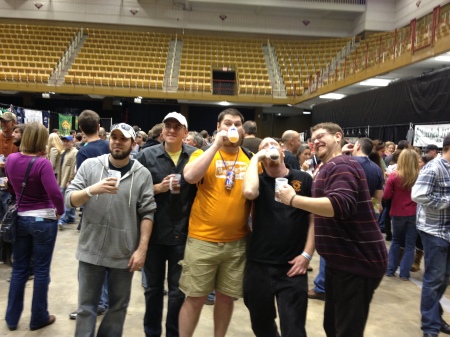 Beer up the Yazoo!

The HeinzelMannchen Gnomes at work 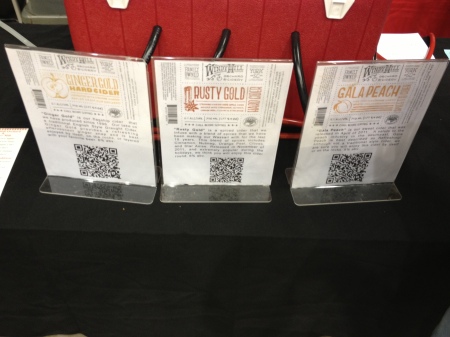 There was even some cider on tap

One thing I noticed about this year’s festival is that several of the local breweries were not in attendance. I did not see Asheville Brewing Company, Oyster House, Nantahala, Wedge, Green Man or Altamont. It left me wondering why they weren’t there. Maybe someone will read this and leave a comment below to clear up the mystery. Also I do regret not getting to the MALT booth before the homebrew ran out. I should have known. EVERY beer festival, the homebrew always runs out first. I do want to give a big shout out to Adam Reinke who I’ve been following on twitter for awhile but finally met in real life. I’m looking forward to showing him and the Asheville contingent around when they come visit.

Well after hours of sampling great beer, hanging out with friends, eating the food provided and having an overall great time, Winter Warmer came to an end. That did not mean the end of the fun, not even close. A short rest break at the hotel and it was time to head over to check out the now opened Wicked Weed Brewery.

The place was packed and there was a line and wait to get in. From my understanding, it’s been like this almost every night since they opened. Luckily a party left shortly after my friend and I arrived and we were allowed in. We walked inside and glanced around. I immediately spotted Erich, Pam and the Studio Brew crew holding  seats for us. 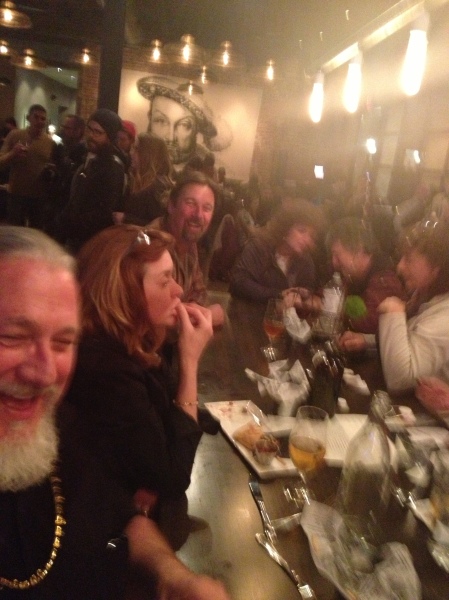 Erich and Pam of Studio Brew with friends. 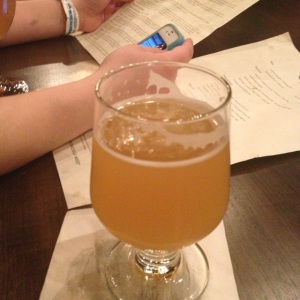 After some beer and food, it was time to check out the bar downstairs. There was a whole other beer selection down there. I wish I had taken more pictures. 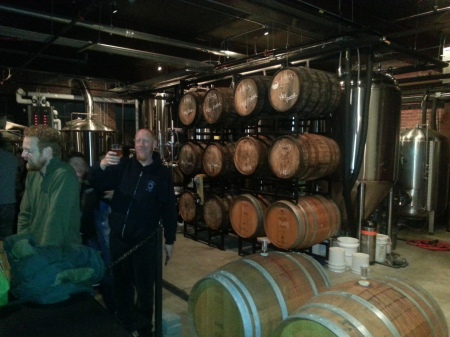 Erich took this picture and emailed it to me.

There were 2 more stops before the evening would end. Erich, Pam and friends had called a cab to go back to their hotel, so we also left Wicked Weed. I wanted to go get a 6 pack of one of my favorite beers, Ninja Porter. Asheville Brewing Company had just started canning it a week or so previous. A quick half pour was enjoyed and a couple of 6 packs were picked up. After dropping them off at the room, it was time for 1 more stop before calling it a night.

Ninja Porter, open up a can of Whoop Ass.

Anytime I go to Asheville and stay downtown, I always end the night at The Thirsty Monk. Considering that it is considered one of the top 100 beer bars on the planet and that it’s only a block from the hotel, there’s no reason not to. However, by the end of a long day of sampling beer, I was pretty worn out. I just had 1 half pour of Green Man’s Rainmaker before stumbling back to the room. 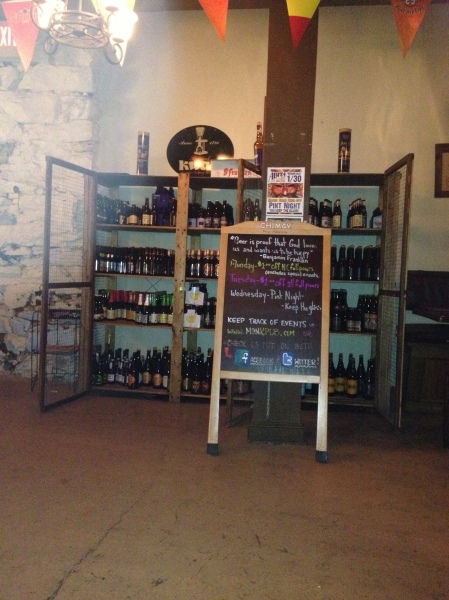 Beer Cage across from the couch downstairs at Thirsty Monk.

The next day came and it was time to head on. By this time my budget for the trip was almost exhausted, but I still had to stop by Bruisin’ Ales. Inside I ran into Knox Beer Crew’s Matt Crowell who was checking out. I managed to get buy the smallest amount of beer I ever had from that world class bottle shop.

The least amount of beer that I have ever purchased from Bruisin Ales.

Hopefully I’ll visit Asheville again real soon. Until then, I encourage you to follow Thom O’Hearn on twitter, he’s the new beer writer for Mountain Xpress. It’s the job Anne-Fitten Glenn had before she got the marketing position at the new Oskar Blues plant.

Two more items before I sign off. As you can see by the background image on this site, the Tennessee Winter Beer Festival February 9th is SOLD OUT. I knew it would, and tried to warn everyone who said they were going but hadn’t bought tickets yet. If you’re lucky, you might find them on Craigslist.

The last item is incredibly important. Fix The Beer Tax is a group lobbying to do just that in Tennessee. The recently launched website (as well as twitter feed and facebook page) has a lot of information on this very important issue. It also has a link where you can send a message to your state legislator  to let them know how you feel about this issue. I strongly encourage everyone to do so.

Well enjoy the Super Bowl this weekend. I don’t really care who wins, but I’m slightly pulling for the Ravens so Ray Lewis can retire after a big win. I’ll post again soon, possibly live from the Tennessee Winter Beer Festival.

Until then, can the Ratchet Brews Crew of Todd, Richard, and Dalton  meet at the Brewery on High this Sunday at noon for some beer filtering, kegging, bottling and LLC discussion? Let me know y’all.