On Sunday January 13th at 1 pm many of Knoxville’s craft beer producers, distributors, venue owners and managers, bloggers and supporters met at a secret beer based location to discuss and plan Knoxville Tennessee’s second annual craft beer week. Knoxville has joined the growing list of cities celebrating their own unique craft beer culture with a week of tastings, beer dinners, cask, rare one off beers, special events and the 3rd annual Knoxville Brew Festival at the end. The dates for this great week long celebration is June 22nd through June 29th 2013. 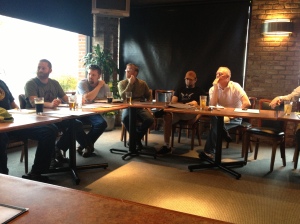 Still early in the planning stages, but I can tell you that we really want to make this huge. Some of the things discussed were a collaboration beer between Smoky Mountain Brewery and Saw Works Brewing Company and a home brewer competition. As we progress towards the date, more info will be available on the new website KnoxBeerWeek.com. You can also keep up to date on twitter @KnoxBeerWeek and the Knox Beer Week Facebook page.

Like with any event of this magnitude, we need a logo. A plan was hatched and a contest born. Do you think you have what it takes? Fame, fortune and best of all PRIZES are yours to claim if your design gets picked to represent Knox Beer Week. This logo will be used on all promotional material for Knox Beer Week and hopefully serve as a untappd badge as well. To enter email your spiffiest design to info@knoxbeerweek.com and we will pick the winner at our March meeting. We haven’t exactly determined what the prize would be, but it will be something very cool. We’re thinking something along the lines of 2 tickets to Knox Brew Fest, some swag from Eagle’s vaults, certificates for growlers and swag at participating bars and breweries, etc. We’ll announce the exact prize pack as soon as we solidify it. Just know we are going to insure that whoever wins is going to be VERY happy. Here are the rules: Entries must be received by February 21st. All submissions become property of Knox Beer Week. Entries/ design submissions are limited to 3 per person. Prizes have no cash value. Must be 21 to enter. Nothing offense that you wouldn’t want your elderly conservative grandmother to see.

Now that we go that out of the way, I sincerely hope you have gotten your ticket to next month’s Tennessee Winter Beer Festival in Townsend. I spoke with a few of the organizers who happen to also be members of the Knox Beer Week committee and they say this event is more then likely going to see out real soon. I’ll just refer you to this post by The Knox Beer Snobs and my post from last year on the subject. I absolutely loved being part of last year’s event and am so looking forward to this one. Sales are limited to 200 tickets total, there are very few left. You can get them online or purchase them at either The Casual Pint locations. The money spent is well worth it. It’s a great event, you get beer, a shirt, food and support a very important cause. I will be there and I hope you will be too.

The last thing I want to mention is the new Knox Beer message board. This is going to be a shared Knoxville Beer forum where anything can be discussed. It was just set up and the colors and design are still being worked on, but feel free to sign up and start posting.