Well I didn’t originally plan on doing this, but I’m going to try to live blog today’s beer road trip adventure from my phone. I intended to post about it after the trip, but I figured as long as I have my all important phone charger I might as well. Plus this way those of you who didn’t make it can live vicariously through me. Just grab some beer & refresh this page every half an hour or so for live updates. Of course real time drinking stats can be found on my twitter & untappd feeds.

So where am I going? This picture can explain it more then typing a long ass description with my thumbs can. 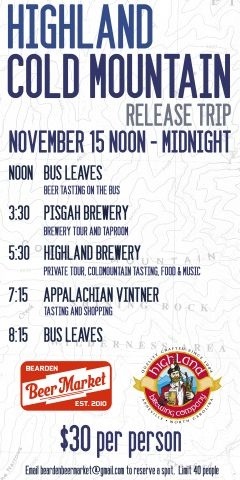 11:48: I just arrived at Bearden Beer Market. We’re hanging out waiting. There is so much beer on this bus! Fellow Knox Beer Crew GABF alum Big Magic Beer is going to co-star on this adventure. Ladies and Gentlemen, BIG MAGIC (applause)

Say something to the people following along at home Nick. “For the love of craft beer!”
Ok Nick.
12:20 We are on the bus. Did I mention there is a ton of beer? Good thing this bus is equipped with a restroom.

One of the many coolers of beer in the front seat

We are on our way! There is a lot of good people and good beer on this bus. My 1st official beer of this trip is Dogfish Head’s Positive Contact that I brought to share.

1:51 pm: I slowed down a little on the drinking. I’m still sipping though. I’m trying to finish reading Asheville Beer by Anne Fitten Glenn ( aka @Brewgasm on twitter). Word is she might meet up with us at the Highland Brewery release. I hope so. I can finally meet her in real life & get my book signed.

Myself with a flight of Pisgah’s finest. Picture of me taken by Jen Parker.

It was kind of spooky accurate.

Ladies & gentlemen, that man who made this all possible, Mr. Matt McMillan! Aka Matty Mac:

Thanks to Matt from Bearden Beer Market for putting this trip together.

4:12pm: Pisgah was freaking awesome! We are now back on the bus. I’m feeling pretty good. I wandered back where the magic takes place and snapped some pictures. 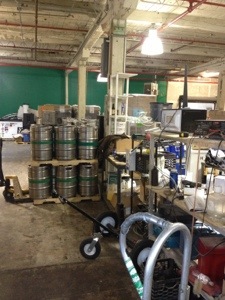 Jason Caughman, owner of Pisgah took time to meet with Adam and myself. Here he is venting one of the barrels to let us have a smell. He also shared a 3 year aged Christmas ale with us.

Behind the scenes I met with Jason Caughman, owner and Co-founder of Pisgah. We spoke for awhile about brewing and Pisgah’s plans for expansion. I could have talked beer with him all day but it was time to go.

5 pm: We’ve been at Highland Brewing Company’s Tap room for a few minutes.  I’ve already seen my friend Erica & now being given a tour by Kitty.

Big Magic! He looked around the massive space and declared “It’s the Home Depot of beer!”

A picture taken before the place got completely packed

I got one of the last pours of El Lupulo before it was gone. The small batch stuff ran out quick!

Right before we took the tour. We had to wear safety glasses. Safety first! 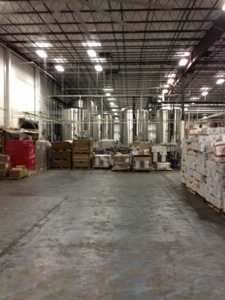 5:46 pm: We’re still at Highland Brewery, I’m enjoying a 2012 Cold Mountain. Had to pick up a couple of the big blue bottles, since I know how rare this beer is going to be.

Hungry! Thankfully there was a food truck and a hot dog cart at Highland. I had to get me a free range organically fed tofu beast dog. 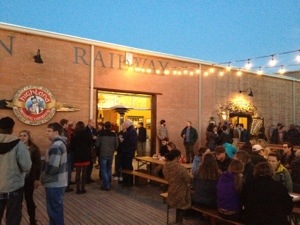 Outside Patio at Highland

6:50 pm: Faded! On the bus again.
8:08 pm: We stopped by Appalachian Vintner for some bottle shopping. They have 10 beers on tap but my off switch kicked in so I didn’t drink. I did however spend more then intended. At least I got some goodies to share. 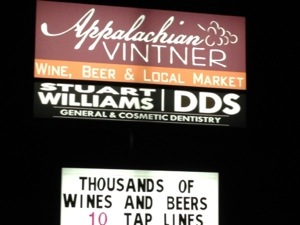 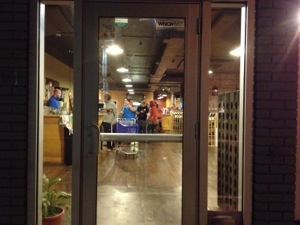 A small portion of my score.

8:52 pm Last stop of the night. Time for one last beer & dinner. Luckily the last stop is at one of my favorites Asheville places, Asheville Brewing Company on Coxe Ave. I’m getting a veggie quesadilla & washing it down with batch 272 a small batch dry hopped IPA. I also picked up a 6 pack of Shiva IPA cans.

Well we got back on the bus for the trip home. By that time we were all pretty faded from a day of drinking. I somehow managed to sleep for most of the trip back. Somewhere around the Dandridge exit, a drunk ass Big Magic started singing Toto songs to entertain us. Somehow that degraded into him rapping Easy E lyrics. Half of the bus was groaning while the other half was laughing. Big Magic can be pretty funny sometimes.

Back at BBM I was too tired to say good byes to all my buddies I just adventured with. I just got all my stuff to my car and drove home.

Thanks again to Matt and The Bearden Beer Market for putting together this great Asheville beer run. I look forward to the next one.