There’s a few things coming up in the Knoxville craft beer scene to tell y’all about. First a note on a few things that already happened. Last Tuesday was the election and America voted another term for the first president to have beer brewed in the White House. The other choice was a guy who has never drank a beer in his life. I personally don’t trust a guy who has never drank beer, and it seems a lot of people didn’t either. For election night, I had brewed a copy of the White House Honey Ale. The recipe and video were published on the official White House blog. It was a really easy extract based brew. I was able to brew 5 gallons in the short few hours I typically have after work and before bed time. I followed all the directions as per the White house, so it would be as close to their recipe as possible. For election night we poured free samples for people to taste and enjoy at the Casual Pint’s downtown location. There was a pretty big crowd come out to try it and watch the election returns.

So how is this beer? It’s really basic, very drinkable but a bit on the English side of the ale spectrum. Although I liked it, It’s not a beer I’d likely make to keep on tap at home. Other people seemed to really enjoy it. My pal and fellow blogger Saccy drank a bit and I made sure to constantly fill his cup. He wrote about it and posted this cool picture on his website. 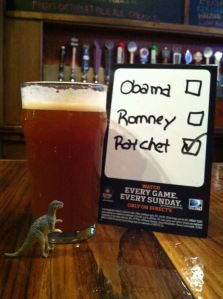 Saccy’s sign. Thanks for your vote! Check him out at Knoxbeerdinosaur.wordpress.com

The Tennessee Valley Homebrewer’s latest Big Ass Malt Order or (BAMO for short) just wrapped up. Collectively the club ordered 2 pallets of grain. I did my part and ended up with 325 lbs. The bulk of my order was organic 2 row brewers malt. I also picked up more Rauch Malt, some vienna, light munich, and crystal 60. This should cover my base malt needs for the next 6 to 7 brews. For me this buying in bulk at wholesale price is well worth the yearly dues I pay to the club. If you are a homebrewer and in Knoxville, click here to find out more about joining. It’s well worth it, even if you don’t brew all grain. Members can get malt extracts at cost as well.

Back of my CRV loaded with my BAMO order

I also recently ordered bulk hops from the website HopsDirect.com. This website is by Puterbaugh farm out in the Yakima Valley. It’s a family run farm that grows and sells fresh leaf hops by the pound. I was shopping around for leaf hops on their site when I came across a proprietary hop they grow call Belma. This is the first year they are releasing this hop and the description sounded wonderful. The best part is the price, $5.25 a pound! This is unheard of for any hop variety. Even Cascade which everyone grows and is the most readily available hop cost $13 a pound. I know that this is an introductory price and in the future this hop will probably be in the $15 to $18 a pound range. So I bought 3 pounds. I ended up selling one of them at cost to my friend Kavon who is also a homebrewer and bartends at Suttree’s. But still I have 2 pounds. These hops smell fantastic. Much like other American hop varieties, they have a very citrusy aroma. I couldn’t wait to use some of it, so I brewed a beer this weekend. I took my recipe for my Cascadian Dark Ale (or Dark IPA if you prefer) and tinkered with it to include these hops. The last couple of times I’ve brewed, I’ve had help from several good friends. It’s great to have people lend a hand (especially with the clean up) on brew days. However, this time I wanted to get back to my roots and brew alone. It’s almost meditative for me to do that every once in awhile. So I didn’t tell anybody, got my ingredients together, started a monster yeast starter a couple days before, went to the spring and got water, spent my Sunday brewing and now I have 10 gallons happily bubbling away. My next brew day I will include my friends. Next Sunday I plan on brewing a Belma based pale all. I’m going to call it the KBC 505 which is reference to an inside joke with the guys I went to GABF with.

6 ounces of Belma hops from HopsDirect.com

My friends and co-owners of Suttree’s High Gravity Tavern, Matt and Ann, went on beercation last week to the west coast where they traveled and visited breweries. I got several text from Matt when he was at Russian River Brewing Company. He sent me the pictures below:

Well last night at ol’ Sut’s we had a private employee and friends party with some goodies they sent back. There was a case of both Pliny the Elder and Blind Pig. I brought a few bottles of rare stuff to share as well along with a 2.5 gallon keg of my Oktoberfest. It’s was a great time and lots of good beer was drank. I took a few pictures as well as a short video clip. Thanks Ann and Matt for throwing this party and for the Pliny shirt you brought back for me. Y’all are awesome!

Pliny the Elder, one of the highest rated IPAs ever. 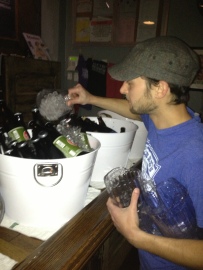 Matt iceing down the beer

More bottles and a mini keg of homebrew

Well there’s a few things coming up soon in Knoxville. This Thursday there is a bus leaving from Bearden Beer Market going to Highland Brewery for the release of Highland’s Cold Mountain Winter Ale. I’m not sure if there are any spots left. It’s $30 per seat for a trip to Asheville. More details are here and in the image below. I am going, it sounds like too much fun to pass up. I’ll try to post about it afterwards.

Also coming up this Saturday is the Brooklyn Brewery Hurricane Sandy relief fund raiser. This charity event, co-sponsored by Brooklyn Brewery and Eagle Distributing will be going on all day Saturday at both Casual Pint locations, Bearden Beer Market, Vic’s Beer Garden, both Brixx Pizza locations, Central Flats and Taps, and Suttree’s. So go drink beer, it’s for charity.

One more thing of note. Next First Friday, December 7th at 7pm I will be pouring FREE samples of my winter seasonal. Previously called Spicy Cocoa Stout, now called I’m Warming You, it’s a 7.3% abv imperial chocolate milk stout brewed with Tennessee cherry chili and jalepeno peppers. This will take place at Jackson Avenue Market in the JFG building in the Old City. Mark it on your calendar now and let’s pack that place.

Seriously, y’all come out for this one. Please?