Friday morning started off with a couple of the crew nursing hangovers, but myself feeling completely refreshed. I got up and immediately started uploading pictures and updating this site while everyone got their things together. Eventually we got everyone motivated, hopped in the jeep and headed out on our adventure.

Hey Broncos, when you’re done can we have Peyton back?

2 of my favorite things, Hops and Pie

First food of the day after a quick stop at Mile High Wine and Spirits for more bottle shopping.

Big Magic caught me updating this website while waiting for Hops & Pie to open. 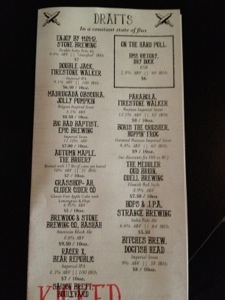 Draft list at Hops and Pie. Started the day off with a sample pour of DogFish Head Bitches Brew. It’s the first time I’ve had it on draft.
I wish I would have taken more pictures there. We ate and shared samples of all kinds of super great beer. The next batch of pictures is our trip over to Crooked Stave.

Crooked Stave is located in a little warehouse area. A lot of their beers are sours, wild yeast and barrel aged.

Big Magic strike a pose in front of a massive barrel

The next thing we did was drive to Downtown Denver and stash the car in a parking garage. We’re leaving it and taking a can home tonight. Then we walked a few blocks away to go somewhere I’ve wanted to visit for years, Great Divide Brewing Company in Denver Colorado.

The entrance & outside fermenters

The inside bar. This place was packed with people in town for GABF. 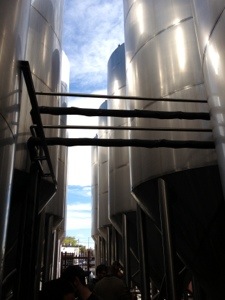 Drinking outside in the fermenter farm. Must take a lot of glycol to keep these cool in the sun.

One of the grain augers attached to the silos

Inside brewing equipment at Great Divide 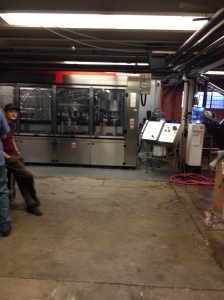 The bottling area at Great Divide

The Line was way too long, so we just walked on by

Freshcraft, where we we’re able to slip in for a quick drink 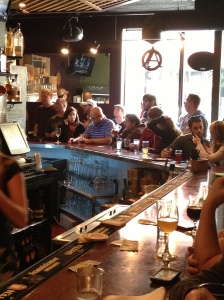 The Bar at Freshcraft

I know you can’t see it in this blury picture, the the beer menu at Freshcraft is on video screens. What an awesome idea.

We were slowly making our way towards the Convention Center for the Friday Night GABF session, so we didn’t stay at any one place for long. After sharing my sample size beers, we headed off to the next stop. 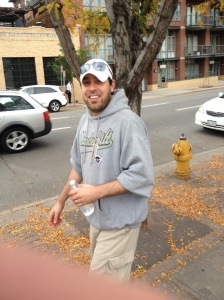 Task master Matt keeping us on track. He said “no pictures.” so I snapped one because my phone was in my hand and I could.

The last place we stopped at before going to the convention center was Euclid Hall. We had one more beer because we all knew we’d have a long wait to get in to GABF.

Euclid Hall. Someone in our crew remarked “It’s the Suttree’s of Denver.” 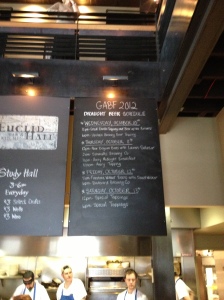 The upstairs bar at Euclid Hall

The Road to GABF poster at Euclid Hall

It was time to get in line. The closer we got to the convention center, the craziier the energy got. People were trying to scalp tickets, and there was a big crowd forming. The air was thick with anticipation. At this point, the battery for my iPhone was almost dead, so I didn’t take a lot of pictures. Here’s a few. 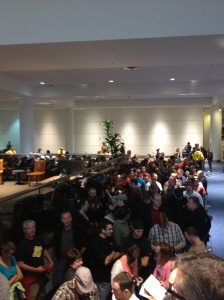 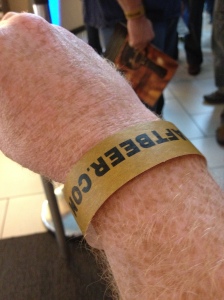 They came through the Members line, scanned our tickets and gave us our wristbands! Time to drink!

Well they let the Members line go in 15 minutes early. They wouldn’t pour beer for that time. It was such a tease. Instead I sought out the superstar booths to get some pictures. 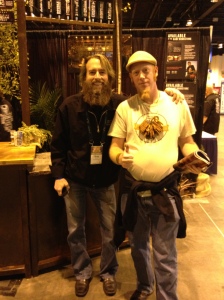 Myself with the world famous Greg Koch of Stone Brewing Company. The first real beer celebrity I met.

Well, at this point I looked all around the convention center for a backpack to purchase to carry all my stuff. I was upset that they didn’t allow outside bags. Seemed like a stupid rule to me. I finally bought a cool bottle opener for $5 just so I could get the canvas bag to carry stuff in. I also found a a place to charge my phone and left it there for almost the whole event. Most of the following pictures are from near the end. I plan on taking more on Saturday.

Myself and Billy, one of the owners of Catabwa Brewing Company. He’s a really nice guy and we chatted for a few minutes near the end of the session.

Myself with my buddy and fellow TN Valley Homebrew club member Paul Hethmon. Paul is pouring his Pro-am entry at The Smoky Mountain brewery booth. Here’s to wishing they get a medal.

This is one of the booths I drank the most at.
NOT. 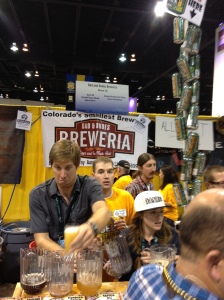 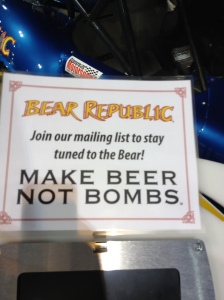 Great slogan that I can get behind 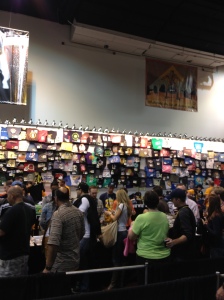 shut up and take my money

“We want you to leave here broke” 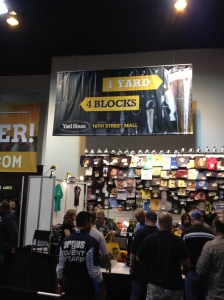 Well this is all for now. Hopefully I’ll get better pictures Saturday.

This entry was posted on Friday, October 12th, 2012 at 13:19 and is filed under #GABF, #knoxbeer, Beer, Beer Festival, beer travel, Craft Beer, drinking, home brew, Knox Beer Crew, Knoxville Beer, Knoxville beer bars, Knoxville beer blog, party, Ratchet, seasonal. You can follow any responses to this entry through the RSS 2.0 feed. You can leave a response, or trackback from your own site.