Thursday morning couldn’t come soon enough. After months of waiting and anticipation, my Beercation to Denver and the GABF had finally arrived. I couldn’t sleep to well the night before. I kept waking up every 45 minutes or so to stare at the clock to see it was time to get up yet. At 4:45 am, I got up and got ready. I drove over to Matt Crowell’s house where Nick and Mark were. We had to go pick up Jason and head to the airport. Before we left, we thought it only appropriate to kick off our trip with a toast. This crrepy little guy is what we drank:

Well we picked up Jason in and headed to the airport where Beverly dropped us off. Here’s a picture we snapped before we went in. 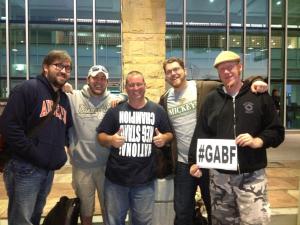 Knox Beer Crew ready to fly. From left to right, Mark, Matt, Jason, Nick and Ratchet. #GABF is the twitter hashtag for this event. 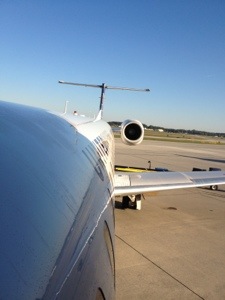 Getting on the plane in Knoxville

After a long flight in tiny, uncomfortable seats, we arrived at the terminal. Kevin LA was there to greet us with a proper sign.

It was so good to see Kevin LA waiting for us. He was holding a beer sign and also wearing an old faded shirt for a store I owned and ran briefly in 2001. I had completely forgotten about those shirts, and don’t even own one myself!

Kevin had this tasty treat waiting for us at his Jeep. Our first official beer of our Colorado Beercation. Thanks bro! 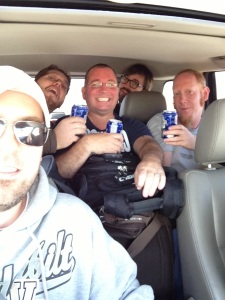 The ride to Kevin’s. Cheers!

Well 1st thing we did was go to Kevin’s place and drop off our stuff. Kevin’s house is absolutely amazing. Once we seen his basement bar, each member of the crew remarked how if they lived there, they’d never want to leave the downstairs. His house has enough guest bed rooms, so we walked through the house calling dibs on each one. I got a very comfortable one right next to a restroom on the main foor. The rest of the guys are downstairs and Kevin is upstairs. It’s a really great set up, and I can’t thank Kevin and his wife, Brit enough for their hospitality.

After getting situated it was off to Boulder and Southern Sun for lunch and beer.

A flight of really tasty beers at Southern Sun in Boulder, CO

Flight time! Check it out on Untappd

Oh yeah. That hits the spot. Check it out, I’m representing for Knoxville with a Saw Works shirt. 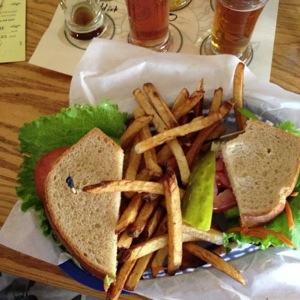 You can’t drink all day on an empty stomach. I had to get my grub on with a tasty avocado and cheese sammich. 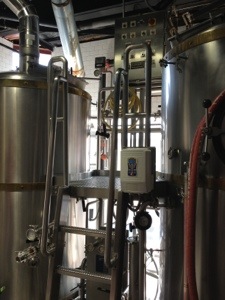 When we were done, I went and had a min-tour with the brewer. I’m always trying to learn something new. Southern Sun brews on a 10 barrel system (that’s 310 gallons per brew) and has 7 fermentors. They also have 2 other locations called Mountain Sun.

The next place we went to was a great little craft beer spot called Back Country Pizza and Tap House. I have heard about this place way on the other side of the country because they are known for their incredible beer selection. 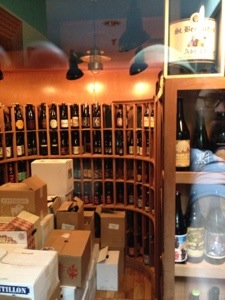 The storage room at Back Country Pizz and Tap 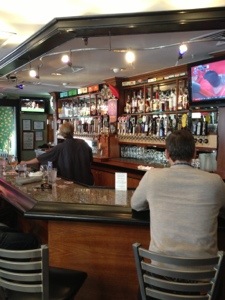 The bar at Back Country Pizza and Tap House

Kevin looking over the beer menu at Back Country.

I got the last of the 2 year old aged keg of Ommegang’s Aphrodite. A brettanomyces finished fruit beer. It was unbelieveably good.

After Back Country we headed to a place I’ve been wanting to go to for awhile. One of the most popular beer spots in Colorado: AVERY BREWING!!!!

The barrel room at Avery

The crew in front of the barrels at Avery

Chilling with the best Coffee beer I have EVER had. Avery’s Tweak, bourbon barrel edition.

I had so many great beers at Avery. I could have stayed there all night. 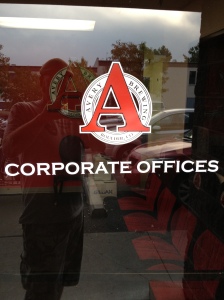 After an hour or so at Avery, we went up the road to a brand new nano-brewery that had just been open for 3 weeks. It’s called Wild Woods Brewery. We went in checked out the list and ordered 2 flights so we could sample everything. For a place that hasn’t been open long, they have a pretty solid line up. I took a look around and realized that they are brewing on a 2 barrle system! That’s only 1 more barrel then me! When I see places like this that are making it, it gives me hope. If they can do it, surely so can I. 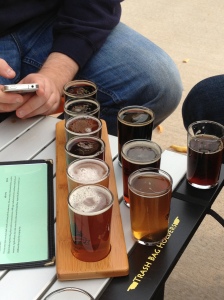 Wild Wood’s 2 barrel system. We were pressed for time so I didn’t get to meet the brewer to ask questions about the set up.

We didn’t stay long at wild woods, so we headed over to Twisted Pine. A lot of people have heard about this brewery and their famous Ghost Face Killa pepper beer. I had no intentions of getting anywhere near something like that. Instead I opted for some of the other yummy beers they offered. I really liked this place and met some really cool people there. 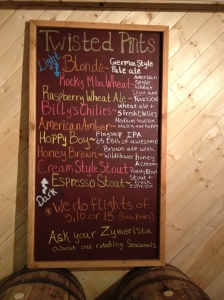 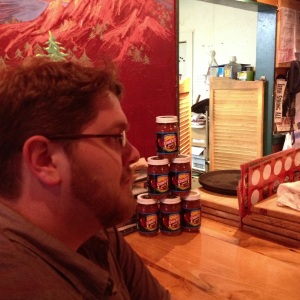 Nick’s got a little tree growing out of his head. 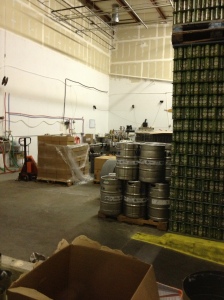 Packing room at Twisted Pine. Didn’t think to ask for a tour. 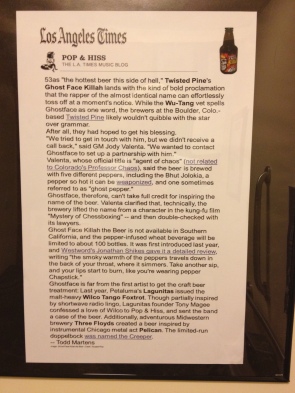 The Bar at Twisted Pine

When ever I have a few, I get fearless. Here’s me laughing in the face of Death.

We still had a few more places to visit, so off we went. Next on the list was Hazel’s Beverage World, a giant liquor store with a great selection of Craft Beer. I picked up a few things to ship back home. 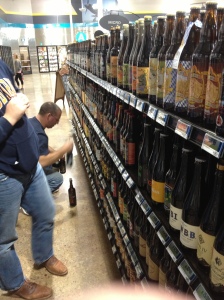 The selection went on and on.

Whoa! There’s a plane coming right for me! Cool decorations at Hazel’s

After loading up our haul at Hazel’s we headed to the last stop of the night. World Famous oskar Blues Liquids and Solids. Time for some dinner and one more round. 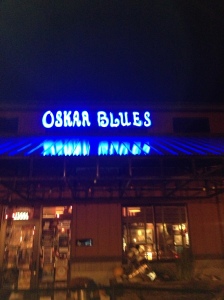 We saw this sign from a mile or so away. 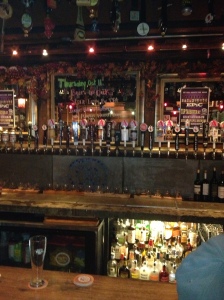 Well, it was time to head back to kevin’s place and enjoy his massive cellar list. At this point, I was done and opted to go to sleep instead. Especially when I saw that Big Magic busted out with these bad boys:

Well, that was day one. Day 2 begins, so tune in later if I can keep my iPhone charged.

This entry was posted on Thursday, October 11th, 2012 at 05:13 and is filed under #GABF, #knoxbeer, Beer, Beer Festival, beer travel, drinking, Great American Beer Festival, Knox Beer Crew, Knoxville beer blog, Ratchet, Seasonal Beer. You can follow any responses to this entry through the RSS 2.0 feed. You can leave a response, or trackback from your own site.