Brewer’s Jam recollection and looking forward to #GABF with #KnoxBeerCrew

What a weekend! I want to write about Brewer’s Jam, but don’t think I’ll do it justice. Instead I’ll just tell you about my craft beer weekend in general.

If you read my last post, you know I was going to be busy. Friday night is somewhat of a blur, but what I can recall was amazing. I got off work and headed to World’s Fair Park to help load the cold truck. There were plenty of volunteers and I didn’t stay long. After a while I went home, cleaned myself up and headed to Adam and Shellie Palmer‘s wedding reception at SawWorks. On the way I dropped off kegs at Saccy‘s for the party.

It was great spending time with some of my favorite people in the Knoxville craft beer community on such a joyful occasion. One of the highlights for me was seeing Dave Ohmer’s face when the guys busted out with the Dave is my Homie shirts that Adam had printed. I made sure to hand mine to Dave with a sharpie to sign it, as seen in the picture below: 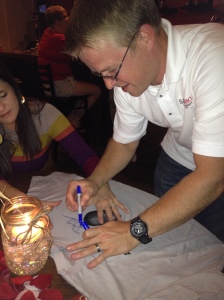 Dave sign’s my “Dave is my Homie” shirt

I can’t wait to see the rest of the pictures of taken at the reception by Rebecca Tatum and hope that she post them soon. Thanks to an idea formulated during a conversation with her, I started interviewing for interns that can read me beer books in a english accent as I do chores around my basement brewery. So, yeah, thanks for that Becca.

Well I wanted to stay at the reception longer, but I did commit to Saccy’s Party, so I headed over there. Downtown was a complete mess when it came to traffic and parking since it was First Friday. I eventually found a spot, grabbed my tap box and walked over the his condo. This event took place in the building’s community room, and when  I walked in, I was treated like a rock star. It was unbelievable. The party had been waiting in anticipation of my arrival to tap the kegs. The same time this party was going on, there was the brewer’s reception across the street at the Woodruff building. I went over there for a few minutes, had a drink, said hello to a few people and went back to Saccy’s. After this things start getting a little blurry.  I do however specifically remember having a great tasting homebrewed Pale Ale that stood out for it’s fresh hoppy character.

Well the party eventually died down, so I headed over to The Casual Pint. Stayed there really briefly, then headed to Suttree’s. Somehow I end the night at the Peter Kern Library. I over did it and had a little too much fun. The next morning was rough.

Brewer’s Jam morning I overslept and woke up dehydrated with a pounding head ache. Drinking beer all day a festival was the absolute last thing I wanted to do. The bad part is that I knew better. I should have been drinking water the whole time the night before. I missed most of the morning chores of delivering ice and kegs to the brewers. Thankfully there were plenty of people to take up my slack. I still feel bad about it and I’ll make up for it next year. I brought a cooler to Brewer’s Jam with bottles of vitamin water and a gallon of spring water. I was constantly mixing Emergen-C , and I drank more of that then I did beer during the day. By the time the gates opened, I was fully recovered.

Before the gates opened, I had a chance to wander around and say hi to a few people. I stopped by and saw Kitty at the Highland Brewing booth. Next I went to Asheville Brewing Company and purchased an awesome shirt. Sadly my friend Mike didn’t make the trip, but it was great meeting the guys who were working the booth in his absence. I went over to talk to the guys at Green Man and flipped out when I noticed they had a bottle of their super rare sour ale, Maceo, at the table. This beer was just released on Thursday. Only a few beer stores in Asheville got a case. No one was willing to hold or ship bottles. It was first come, first serve. I had tried bribing friends to go get it since I couldn’t get out of my plans to drive to Asheville, but had no takers. As soon as I saw the bottle at the booth, I took all the money out of my wallet and offered it to the guy there for it. He wouldn’t sell it. He did tell me to check back and we could work something out at the end. Every hour or so I went back to check if it was there. Eventually near the end of the day, he sold it to me. He said since I was persistent, he would sell it to me for the same price it sold for in Asheville. I was so happy. This really did make me feel like Brewer’s Jam was better than Christmas. It also completes my collection of beers that Green Man has released bottles of. I am going to save this for a special occasion. 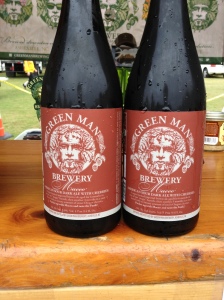 I saw this and freaked out. I had to have it no matter what the co$t… 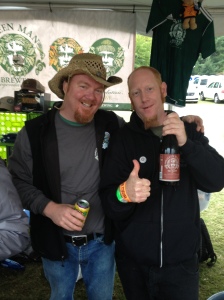 Thank you for selling it to me. You have no idea how happy it made me. 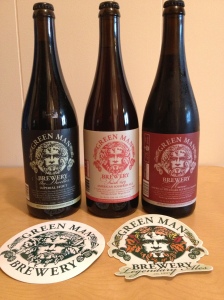 When the gates opened, my beer was the 1st being poured. Both my Butternut Squash Ale and Oktoberfest were side by side. I worked the taps. We had the longest line at Brewer’s Jam. It was crazy! It stretched all the way across the lawn of World’s Fair Park. My beer was a hit and I poured it until it was all gone. The whole rest of the day people would come up and compliment me on it. It’s a great feeling knowing that I make beer that people really seem to enjoy. It was also so nice meeting and talking to people in line who I had never met in real life but read this blog. Thank you! More then once I heard “I hope this isn’t weird, but….” then the person describing how they read my blog, or seen me at one of the downtown bars, or I’ve poured them a beer at work, or they feel like they know me because of my website. Let me tell you. NO. It IS NOT Weird for you to approach me. It’s AWESOME. Thank you, thank you, thank you. Feel free to stop me and say hi anytime. I love meeting new friends. Every person I met that told me something like this, I tried to give one of my bottle cap fridge magnets. If you see me around, say something and I’ll give you one as well. I try to keep a few on me when I’m out in public. 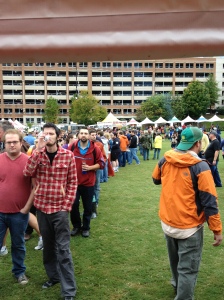 The weather was the best it could have been, and was the best I ever remember it being. It was overcast (so I didn’t get a sunburn) and it was chilly, so I wore my new hoodie the whole time. For the entire time it looked and felt like it could rain at any moment but not one drop fell from the sky. This year I didn’t drink very much, but still had a great time. At festivals, I tend to try for beers I haven’t had before. There were a few I really wanted, but passed because the lines were too long. I also very rarely wandered out into the main crowd of the packed festival lawn. I knew there were many of my friends (Lou of Blues and BBQ for example) that were there, but I just didn’t run in to. I mostly stayed behind the tents where it was less crowded and other brewers were hanging out. I wish I had taken more pictures of Brewer’s Jam and maybe some video, but just forgot. At the end of the festival I was completely sober and hungry. I packed my car, drove home and went with a friend to dinner at the Downtown Grill and Brewery. I sipped some Maker’s 46 for the hour or so we were there. After that headed to Suttree’s where half way through a sample size of Lindeman’s Framboise, I crashed. I had hit the wall and it was like someone flipped an off switch for my body and brain. A lack of sleep had caught up to me. I couldn’t focus on conversation and I couldn’t keep my eyes open. The night was still early, but I couldn’t hang anymore. I got dropped off at my house walked in the door, kicked off my shoes and let myself literally fall into bed. I fell asleep mid fall and woke up 9 hours later completely refreshed. 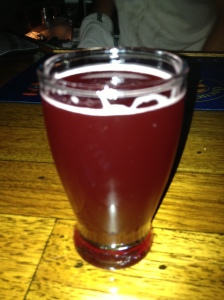 My weekend ended with me working the Sunday afternoon shift solo at The Casual Pint and reminiscing about the last couple of days with my good friends. I also met a really nice couple who own a winery in Virginia and are planning a brewery. I’m didn’t catch their names or the name of the brewery, but I am hoping they email me so I can take a road trip and visit them and their brewery someday.

Well that was this weekend. Next weekend I’ll be in Denver for the GREAT AMERICAN BEER FESTIVAL! I am flying out with 4 other members of the Knox Beer Crew. We will be repping hard! I am going to make another effort to blog everyday of the trip so those of you who can’t make it can live vicariously through my adventures. It’s going to be epic, so check back Thursday through Sunday to follow along.

Once again, I would like to thank my readers, friends, twitter followers and people I met this weekend for all the kinds words. Hope we all meet and share beer again real soon. 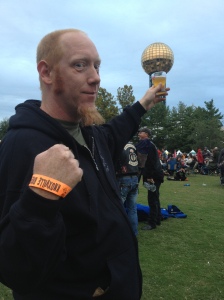 A glass full of Sunsphere