This is my third attempt to write about last weekend’s Thirsty Orange beer festival in Johnson City. My original idea was to live blog from the festival. I even set up the page the night before. However, there was so much to do and I was so busy it just wasn’t possible to live blog. I hardly even had time to take my phone out of my pocket to check emails, text and tweets.
So here it is, almost a week later. Let’s see how much I can actually recall.
Here’s some background first. I am currently moving. Everyone knows that packing and moving is a big pain in the ass. Luckily I pretty much have a whole month to do it. I am renting a slighly bigger house on a hill that is closer to downtown. The view is pretty great and the fact that I have a whole basement to brew in is what sold me on the house.

Well, I have a brew schedule that I am trying to stick to. I didn’t want to try to move my fermentation fridge and carboys while they were in mid-fermentation. So I did what any slightly crazed beer obessessed homebrewer would do. I got up extra early Friday morning and started brewing. I ended up mashing in around 5:30 am. I figured, if I was going to move full carboys that I should do it right after brewing so the sloshing caused by the car ride would help oxygenate the wort. Yeast needs oxygen to help get it going. So as I brewed, I cleaned. I moved my small lagering chest freezer into the back of the van. Once I was done brewing my Maibock, I drove the whole set up to, and set it up in, the basement of the house I’m moving in to. I plugged in the fridge and thermostat control and put the two 5 gallon carboys to ferment at 48 degrees. I was done completely around 11 am. I then went over to the Downtown Grill and Brewery and picked up the Woodruff Brewing beer that I took to the festival.

I than went home and packed the van full of tubs, beer, kegs, ice and merchandise.  I then drove to Johnson City. Arriving there I quickly checked into my room. The festival site was at the Mellow Mushroom just down the road, so I headed there to meet with the organizers. I stashed the kegs in the walk in cooler, had a beer and taked plans for the next day. Well as you can imagine, I was exhausted from getting up at 4:45 am that day to brew. I knew Saturday was going to be hectic, so I went back to the hotel and passed out early.

Saturday morning, I rolled out of bed, made some crappy hotel coffee and headed to the site. I was still pretty tired and the crappy hotel coffee just wasn’t kicking in. Thank goodness one of the guys there, Andrew, had brought a carafe of great coffee to share. After “irishing up” a cup of it with a shot of baileys, I was good to go.

While crews set up tents and generally prepared the site for the days festivities, I worked on getting my table, kegs and jockey box set up. I was also on infuser duty. I had my own infuser to run beer through and the festival had it’s own. Responsible for the festival’s infuser was a cool dude (who I had the pleasure of working with) that they called Flipper. I showed him the ropes on how to pack it, how to set up the lines, etc. He picked up on it rather quickly and was able to take the infuser around  and fresh infuse different beers with different ingredients all day. It was definitely a hit of the festival.

Well once the gates were open, things were hectic. I still hadn’t completely set up my merchandise when a line began to form at my table. I was very greatful that the festival organizers had provided me with someone to assist me at my booth, as I honestly could not have done it by myself. Right at the start, I had a beer line break in my jockey box. My first clue that it occured was when beer started pouring out the sides. I lost the whole keg of chocolate ale that I had brewed for the Iron Brewer challenge. I had to cut the bad section of line out and rehook it up to a different keg.

Once all the kinks were worked out, the festival went really well. I did my share of drinking, slipping away from my booth a few minutes at a time to try other beers. I met more then a few really cool people, fellow homebrewers from all over and tried many great brews. It was also really good to see and hang out with my Knox Beer Crew friends who had made the trip up from Knoxville. They left before the end of the festival, but we did have time to squeeze into the on site beer photo booth and get our pictures taken.

Well I stayed until the very end, and was the last brewer set up and pouring until my ride came and got me. I packed up, said my goodbyes and went back to the hotel. After settling in, I went downstairs to get something out of the van and realized that there was a comedy show taking place in the hotel’s restaurant. I drunkenly wandered in and sat in the back unlit portion of the space and laughed for awhile. Then I wandered back upstairs and passed out.

It was a great festival and Aaron and his crew always put together a good event. As far as I could see, everything went smoothly and everyone had a fun time. If this happens again next year, you can count me in to be there.

Ok, will this is all for now. I don’t feel like this write up is all that good, but I had to post something. If you read this and were at the Thirsty Orange, please leave a comment with your thoughts below.

hey you caught me

My infuser packed full of ginger and oranges

my booth and my pourer

a bunch of drunks

my booth (and Flipper)

drinking with an orange

Knox Beer Crew trying to cram into a beer booth

I tagged the Mellow Mushroom!

He wasn’t so Mellow when he found out 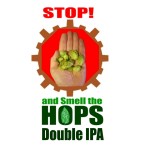 Announcing some of the Homebrew contest winners at Thirsty Orange

This entry was posted on Thursday, April 19th, 2012 at 19:01 and is filed under #knoxbeer, Beer, Beer Festival, Craft Beer, Drinking, home brew, Knox Beer Crew, Knoxville Beer, party, Ratchet, Tennessee Beer Festival, Thirsty Orange, Uncategorized. You can follow any responses to this entry through the RSS 2.0 feed. You can leave a response, or trackback from your own site.

3 Responses to Report on the Thirsty Orange Brew Extravaganza @ThirstyOrange

Leave a Reply to Some of my #homebrew recipes. « Ratchet Brews Cancel reply